Home / About Us / Awards

The Canadian Organization of Paramedic Regulators (COPR) is please to announce the recipients of the 2021 Award of Excellence. The award is presented to the candidates that received the highest score on the respective Advanced Care Paramedic (ACP), Primary Care Paramedic (PCP) and Emergency Medical Responder (EMR) Entry to Practice Examinations.

In 2021 there were 1312 PCP candidates, 328 ACP candidates and 450 EMR candidates that wrote the COPR Entry to Practice Examinations.

Aaron was raised in Red Deer, Alberta, having spent his life in central Alberta until he was 20. Aaron joined the Canadian Armed Forces (CAF) at the age of 20 years old and spent most of his career based out of Victoria, BC. Aaron spent 9 years in the Navy as a radar operator, Maritime Tactical Operator and finally as a leadership instructor before releasing from the military in 2020.

Aaron became interested in pursuing a career as a paramedic after receiving Tactical Combat Casualty Care (TCCC) training as part of his Maritime Tactical Operator course. He decided to do the EMR course at the Justice Institute of British Columbia while still in the military and found himself becoming fascinated with medical calls during the course, which solidified his decision to change careers to paramedicine.

Aaron started PCP school immediately after his release from the CAF in late summer of 2020, attending the full-time program at Columbia Paramedic Academy in Victoria, BC. Aaron acknowledges his incredible group of instructors that showed great dedication to the success of his PCP class, for which he is truly grateful. Furthermore, he had excellent preceptors on ambulance during his practicum which helped in the transition from the school environment to street calls.

Aaron completed his PCP program in the spring of 2021 and immediately applied to work for BCEHS. He is currently employed by BCEHS, working as a PCP out of station 159 Ladysmith, BC, with great coworkers and a new career he truly enjoys. Aaron is grateful for the support he received from his girlfriend, PCP instructors, parents and friends during his time in school.

Phillip Robinson achieved a top score of 795 out of 800 to become COPR’s 2021 Advanced Care Paramedic Award of Excellence recipient. Phillip grew up in Regina, Saskatchewan. He first developed an interest in paramedicine while in high school. During his grade twelve year he attended a career day at Regina EMS headquarters, which helped to solidify his ambition for a career in EMS. After completing high school, he had the opportunity to participate in a ride-along with Regina paramedics. At the end of that shift, he knew for certain that he wanted to pursue a career in paramedicine.

Phillip worked in commercial construction prior to enrolling in the Primary Care Paramedic program which he completed in 2015 at Saskatchewan Polytechnic, graduating with Great Distinction.

In 2015, Phillip was hired by Regina Qu’appelle Health Region as a primary care paramedic for Regina EMS. In 2016, he was named Regina EMS Rookie of the Year. He has always had a passion for learning and knew early on in his career that he wanted to eventually become an advanced care paramedic. In 2019, he began the Advanced Care Paramedic program at Saskatchewan Polytechnic in Regina. Phillip graduated in 2021 with Great Distinction.

In 2020, he was awarded the Robbie Curtis Memorial Scholarship which was established in 2018 for PCP’s studying to obtain their advanced care paramedic diploma. He also received the Saskatchewan Polytechnic Achievement Scholarship, which is awarded to the individual with the highest weighted average in the graduating class.

Outside of work, Phillip is passionate about nature and enjoys hiking, canoeing, and camping. He has a passion for wildlife, especially birds, amphibians and reptiles. He volunteers with the Wildlife Rescue Society of Saskatchewan doing animal rescue for the provincial wildlife emergency hotline. He also enjoys drawing, painting, listening to music, and playing guitar.

Phillip would like to thank his instructors at Saskatchewan Polytechnic, his preceptors, classmates, field trainer and the many coworkers that offered inspiration and support. 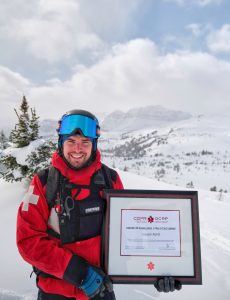 Joe grew up in Cheshire, England and upon finishing high school he left home to pursue a career in the ski industry. Joe headed to Fernie, BC and gained his ski instructor qualifications, He subsequently worked in Courmayeur in the Aosta Valley, Italy and The Remarkables, Queenstown in New Zealand. During this time, he undertook further training in Switzerland to specialise in teaching Adaptive snow sports.

After meeting his partner and chasing winter for some years, he returned to Canada settling in Banff where he undertook his Wilderness First Responder course and joined the Ski Patrol team at Banff Sunshine Village. During this time, he gained a passion for emergency medicine in an austere environment dealing with trauma and medical calls in and out of the ski area boundary.

After becoming a permanent resident of Canada, he decided to put his ski patrol experience to use and follow the path of many other ski patrollers into the field of EMS. He completed his EMR qualification at Alberta Health and Safety Training Institute (AHASTI) and is currently enrolled in the Primary Care Paramedic program at Professional Medical Associates (PMA) in Calgary.

Joe thanks his partner Lucy, all the Ski Patrollers, Paramedics and Physicians that have helped mentor and guide him though this process and for their ongoing support.

The Canadian Organization of Paramedic Regulators